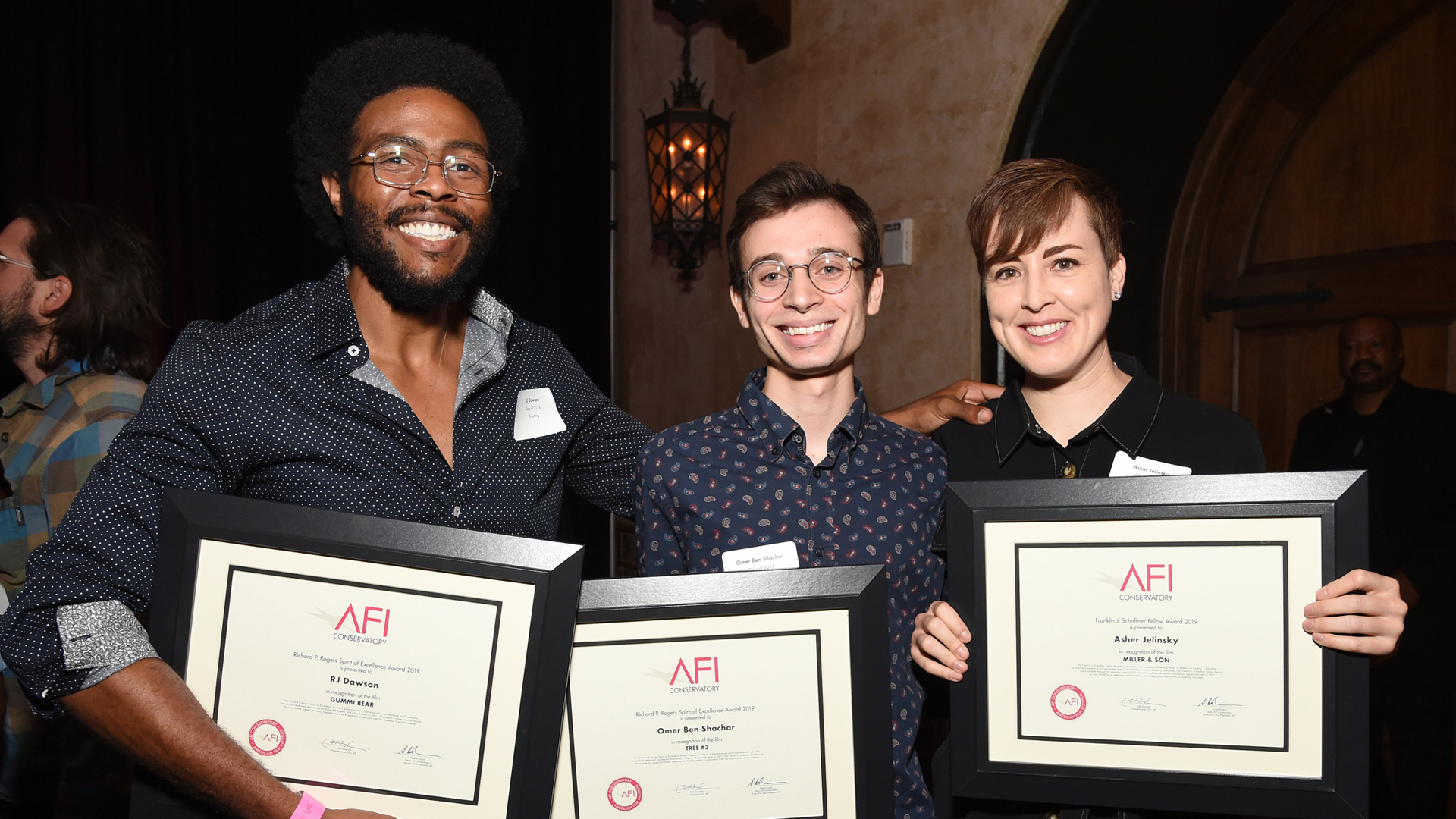 Congratulations to the recipients of the 2019 AFI Alumni Awards! AFI Alumni Awards, which recognize outstanding achievement in directing and screenwriting, were awarded to the following members of the Class of 2018 during a private alumni reception at this year’s AFI FEST presented by Audi.

Omer Ben-Shachar received a Richard P. Rogers Spirit of Excellence Award ($15,000) for his thesis film TREE #3, which also won a Student Academy Award earlier this year. Originally from Tel Aviv, Israel, he served as a director and editor in the Israel Defense Forces’ Spokespersons’ Film Unit before enrolling at the AFI Conservatory. He was recently selected to participate in the 2019 Viacom Viewfinder Directors Program where he will shadow on a Nickelodeon TV series.

Cari Daly received The William J. Fadiman Award for Screenwriting ($15,000) for her screenplay “Interwoven.” Daly is a graduate of Playwrights Horizons Theater School and Experimental Theater Wing at NYU’s Tisch School. While at the AFI Conservatory, she received her MFA in Screenwriting and won the Writers’ Room Ready competition.

R.J. Dawson received a Richard P. Rogers Spirit of Excellence Award ($15,000) for his thesis film GUMMI BEAR. 一道本不卡免费高清Prior to studying at the AFI Conservatory, Dawson worked as a first A.D, attended graduate school at SCAD for Film and Television and participated in the Savannah Film Festival Director’s Workshop.

Asher Jelinsky received The Franklin J. Schaffner Fellow Award for Directing ($20,000) for their thesis film MILLER & SON一道本不卡免费高清, which also won the gold medal Student Academy Award, the BAFTA Student Film Award and the Cannes Lions Young Director Award. Prior to coming to AFI, they received a bachelor’s degree in Media Studies and Public Health from Pitzer College.  Jelinsky is currently developing their first feature and a television pilot.

About the AFI Alumni Awards:

The William J. Fadiman Award recognizes outstanding achievement in screenwriting in honor of the distinguished story editor and AFI Conservatory faculty member, William J. Fadiman (THE LAST FRONTIER). The Richard P. Rogers Spirit of Excellence Award 一道本不卡免费高清is given annually to directors whose performance at AFI embodies the independent filmmaking spirit of celebrated documentarian Richard P. Rogers (PICTURES FROM A REVOLUTION), filmmaker, teacher, mentor and friend who passed away on July 14, 2001 at the age of 57. The William J. Fadiman Award and the Richard P. Rogers Spirit of Excellence Award were established by an alumnus who has chosen to give back to AFI in honor of those who have inspired generations of AFI Conservatory Fellows.